They call me MISTER Tibbs.

That’s it. The end.
That gentle knowing of his power was his calling. We even say his surname “Poitier” with dignity, on his behalf. It comes from the old French word "pot," literally means a “drinking vessel.”
Didn’t we, though? Drink from him? Pour from him? To his last drop?
Even right now we thirst for more of his on and off screen persona. He’s trending on all fronts. And I have just bought a poster of this 1960’s shot of him, -with heightened anxiety that someone else would grab the last of the 3 in the size that I want. I’ve never done that before. There is no other I can think of that would move me in such a way. Maybe David Bowie if I’d thought of it.
Was it a fanatic or  spiritual move on my part to participate in the commercialization of his passing? The hoards of glossy photos and posters of him in polo shirts and tuxedoes for sale, along side the BREAKING NEWS of him leaving us behind, will go on for hours and days.
The nostalgia sites and cinema historians and classic movie channels will pour into us from their finest Poitier Reserves. I’m YouTubing ReelBlack as I write this... (#iAM ambidextrous, you know), watching their LIVE discussion on Sidney in No Way Out a 1950s drama/noir where he played a medical doctor.   Sidney in that movie, facilitating the success mantra, from way back then,  "If you can see it, you can be it." Thank you brother, Poitier. 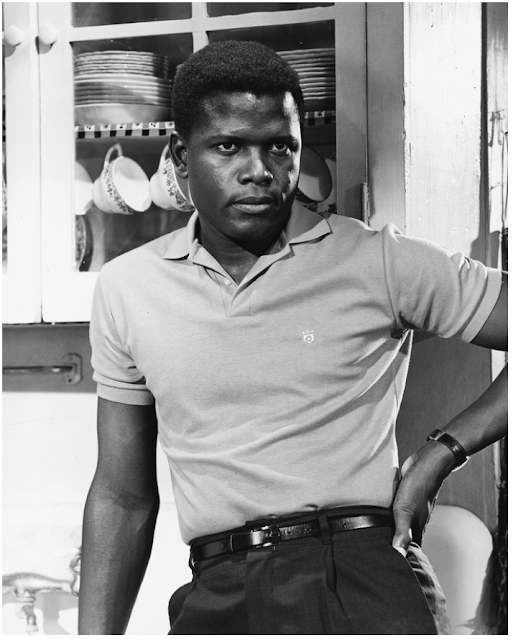 And we need to understand that he’s gone an is amongst our most never forgotten. That all saints return to heaven, just as ancestors before him.
“St. John the Beloved told us what he saw. He saw a vision of “a great multitude which no one could count front every nation, race, people and town”.” - ewtn.com, Solemnity of All Saints.
Sidney Poitier wasn’t an Ozzy, or Billie Dee or Denzel. Sidney Poitier is the CEO of all the other "drinking vessels" like Ozzy, Bille Dee and Denzel.. including the likes of Ali and Harry, and Chadwick  and Hank, even Leon, and all the beautiful Black men we know by one name.
For Sidney, even in the movies, there seemed to be no distinction between him and the characters he portrayed. I don’t need to know how he did that. His passion made it work. Denzel doesn’t do that.  Not Will or Don, or Sam or Forest. Sidney’s gift was fucking unique.
And now it’s the weekend. The perfect time to binge watch in remembrance of Sidney Poitier..
For me? I particularly love him as Brother John, made in 1971, where he played a mystical and enigmatic character... A must watch if you’ve never seen it. I’ve found it to be a rare find on demand, but I’m sure someone will be streaming it this weekend.  And there is Lillies of the Field, To Sir With Love, For Love of Ivy (oMG LOVE THIS ONE), and among many others, and who will ever forget Sidney as Walter Lee, in A Raisin in The Sun, my go-to for reconciliation of real-life cultural shit.
With fondness forever & Farewell to Sidney Poitier.
Poetic Memory #4
Artist:  Sidney Poitier
Movie:  Brother John
Namaste.
Anyone can teach you about love.  I can make you good at it.
| Photo & Prose by Jackie D. Rockwell |All Rights Reserved © 2008-2022 |