How I Am Still Feeling About Will Smith

April 07, 2022
When Will Smith made his way toward Chris Rock and struck him from a satisfied smirk in his soul, that was a signal for me I’d be getting rid of my infatuation with the swagger that was Will. Knocking the wind out of Chris’s sail, for only a sec. Pleased with himself, I’m sure. Willy walked away from the encounter and took his same seat at his same table and proceeded to enjoy the remaining Oscar goings on like the rest of us wanted to.. Including hearing his own name being called for Best Actor award. Denzel leapt. I reeled  What the fucks? for a good thirty minutes. 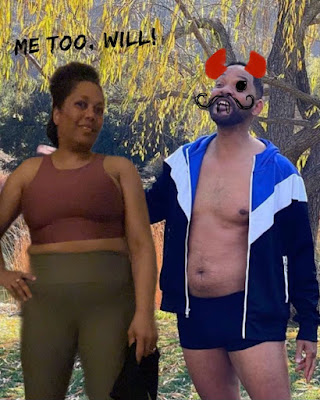 Will -looked the man with seven swords from any Tarot deck.  Intelligent. Cunning. Went home with a prize, even. But was the five of swords in the flesh. A scoundrel, tricked by his conflict with a domineering person.
That joke was not that fucking fatal, and Willy mindfully overreacted. Eager to humiliate and hurt.
Chris was stellar like his tux. Jada was definitely domineering as she watched it all happen... seemingly for her.
But Willy, he is, less one major fan.
Me.
Because ...

If Chris Rock wasn’t safe from Will in the middle of the Dolby Theater in Los Angeles on Oscars Night, March 27, 2022,  There ‘aint nobody safe from Will.

Will Smith
Labels: Will Smith