Proximity Journal quatre - In the name of Jesus, Relax! 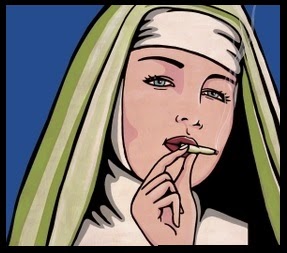 For over 15 years I've enjoyed the sanctity and sanctuary of The Unity Movement of positive practical Christianity. Yes, there is such a thing. But there's another salvo to Unity that makes it lovely to people like me: Among other things, no one has to get baptized or publicly profess they're a sinner.  No one has to deny or hide their sexual orientation, and no one has to even call themselves a Christian or become one to be an active member of the Unity community. Having lived by Unity tenets and raised my daughter up with them from age 6 has been the best thing for my family.  So, when an interview with a Baptist Missions Director ended this week, I felt uniquely accomplished & celebratory.. to say the least.

While the director was running late, his clever aid making great use of the time, sought to discern where I stood in the line to the Kingdom of Heaven.  I handled it well by digressing to family chat. Thirty minutes later... Enter, the dragon.
The mildly domineering scripture quoting disciple wasted no time accosting me on my left, while his back-up on my right, nodded in approval of his every word.
But wait; There's more!  There were his incessant attempts at conversion preceded by those "but what I'm concerned about is.." laments, due to my lack of precise acceptance of the atonement of the blood of Jesus.
In other words, early on, when asked if I'd accepted Jesus as my lord and savior..I didn't exactly say "Yes."  And I didn't say "No."  It was more like, "Not in the way that you think I should..."

The buzzards began circling by the middle of this inquisition, and I was starting to relate to Tituba of Salem in 1692.  The black woman arrested for being a witch.
Double jeopardy!

For what it's worth, I should have just said "Yes," and been done with it, probably.   Which brings me to lesson 257 in A Course in Miracles; another book that guides me through my practical Christianity:  I must remember what my purpose is:

...No one can serve contradicting goals and serve them well... Nor can he function without deep distress and great depression.  Let us therefore be determined to remember what we want today that we may unify our thoughts and actions meaningfully, and achieve only what God would have us do this day.

His holy spirit seemed frantic, jockeying for a position with my holy spirit.  He could not contradict his goal of rescuing my soul, and I could not contradict my goal of staying where I was.
Beautifully, no ego was present. Just a complicated mixture of the blood of Jesus [squared] by his death, his burial and his resurrection  & some plain old Unity talk about the love of Jesus w/NO strings attached.

And had I said, "Yes, I acknowledge that Jesus died on the cross & shed his blood for my sins, and rose from the dead on the 3rd day just to save me from hell," there still would have been other questions and invitations to do and be a part of something that was beyond my scope and convictions.
And you know what?  I was a Baptist once, I know how they think..  I was born and raised in the culture.  But then I went to Sedona..  (crickets chirping)

To make matters better, and finally bring closure, I closed my eyes and took a bold stand for God. Pounding once the table & speaking up that "Gods eyes are too pure to behold our iniquities."

(That's from Habakkuk 1:13, btw. But I didn't tell them that) -To me, this is God in a nutshell.  All I need to know. And all that matters.  I think this is what impressed them the most.

Up until that point, that beautiful upscale conference room, with Missions brochures slotted on one wall, and rustic Christian art all around, had become like a dungeon that required some serious feng shui.  Besides, the preacher was mostly in rebuttal mode and his assistant always only nodding. Neither of us really hearing the other.  And the more I talked, the more I affirmed that what I believe IS valid and wholly organic, cannot be overturned with some one else's prayers of concern for my soul.. And more importantly, my convictions are not arbitrary and made up for the sake of rebelling.
And I could just kiss myself (mwah) that I was beautifully frank and "refreshing," about the matter, said the assistant... and a credit to my new thought race.. if I do say so myself.

I hope they are not sad for me since I've declined their offer.   But they might be happy to know that I drove away from their place with the Blood of Jesus song in my head...  I'd also like to believe that I left them with something that they would find precious..
But I can't think of what.  o_O